In the spring of 1972, Robert Joseph Kates was living in Peculiar, Missouri with a dream of one day having his own business. Later on that year, at the ripe age of 21, he grabbed his backpack, jumped on his 1972 Triumph TR6R Tiger 650 motorcycle and headed to San Diego, California.

After arriving in San Diego, Robert worked as a baggage handler at Lindbergh Field and then later as a maintenance man at both NASSCO and Solar Turbines.

Finally, in 1989, Robert realized his dreams of owning his own business by starting a welding equipment repair business appropriately named, “R.J. Kates Company”. His business would be founded on the basic principles of hard work and, above all, outstanding customer service!

After a year of steady work, Robert was able to hire a former co-worker and friend Glenn Napier, whose experience and knowledge in welding equipment repair would afford Robert the opportunity and time to continue growing the company. 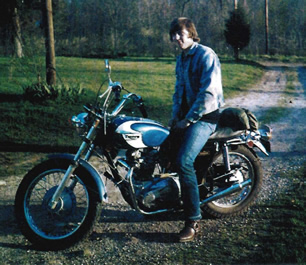 In 1995, Robert decided to mentor his son Josh to be the eventual successor to the family business. Josh welcomed the idea and proved to his dad he was ready and up for the challenge. Through hard work and dedication, attending school during the day and working at the shop on afternoons and weekends, Josh quickly became on integral figure in the growth of the company.

It was Josh who convinced his father that the company would benefit from “renting” welding and cutting equipment. Since then Josh has continued to add services to the expanding company, including the sale, retro-fit, and servicing of automated welding and cutting CNC).

Twenty-five years after its founding, R.J. Kates Company, Inc. has become the leader in the welding equipment rental and repair market. Josh continues to find effective ways to grow the family business yet maintain the fundamental principles of hard work and outstanding customer service established by his father… Robert. J. Kates.